Menu
GET THE APP 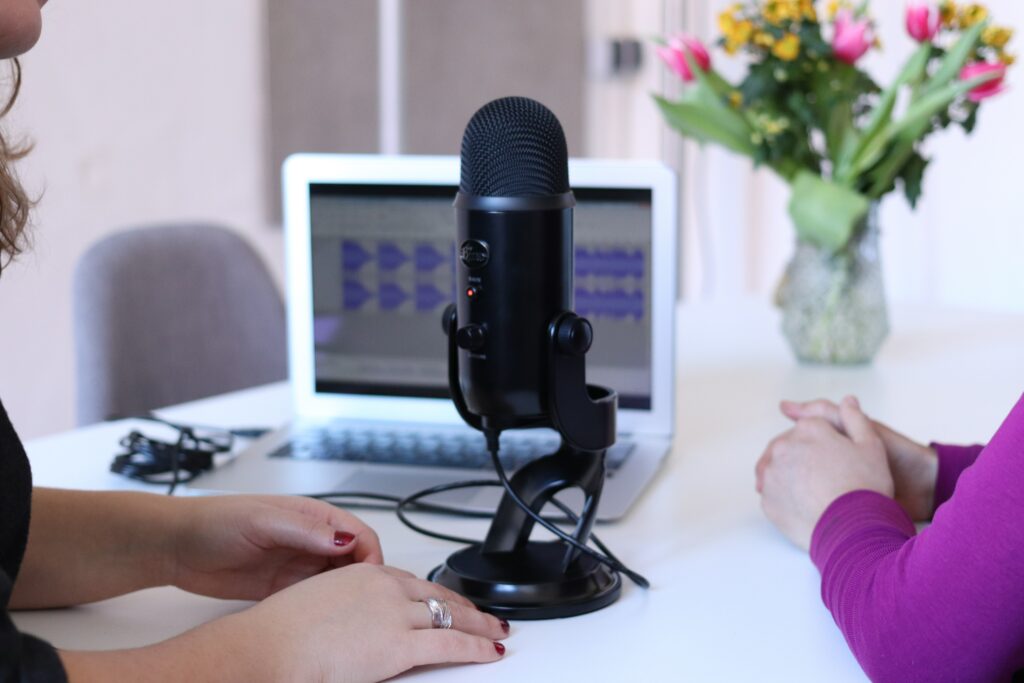 The podcasting business is a growing phenomenon and has become one of the most popular media to disseminate information and entertain people. However, it also follows the trend of other media in lack of representation. To be specific, podcasting is a white man’s game! People of color or other sexual orientation and many other minority groups are clearly underrepresented and do not reflect the growing demand of more diversity in podcasting.

As we celebrate International Women’s Day on the 8th of March, we want to draw the attention to female podcasters and why it’s necessary to hear more from and about women in podcasting. Last collected numbers from 2018 tell that women, at that time, only hosted 22% of all podcasts, which has not changed significantly in the meantime. Moreover, a look at podcast charts and best of lists proves that women are still in an inferior position as male-fronted podcasting dominates the field even today.

If we look for reasons to explain this current state, we should first clear up a misunderstanding. Many podcast listeners argue that they don’t like to listen to higher-pitched voices and therefore prefer lower, in other words, male voices coming out of their headphones and loudspeakers. The question is if it’s really the higher-pitched voices that keeps us from listening to women, or if it’s society which has taught us that female voices are less authoritative. Female voices are associated to be helpful and supportive, such as Siri and Alexa, our virtual assistants on digital devices. On the other hand, male, or lower voices show a certain authority which, so the impression, can teach us something. In that sense, listeners sometimes assume that women don’t know their stuff, hence prefer male hosts. Not because lower-pitched voices are more enjoyable. Our intention is not to blame someone, but to make ourselves aware of the problem in order to be able to fix it.

Besides that, more obstacles come along the way where women have to sustain their position based on stereotypes and prejudice. The male overrepresentation comes, amongst others, from the technical background of podcasts, as, especially in the beginning of the podcast era in the early 2000’s, a certain kind of knowledge was needed to be able to handle the technical aspects. Traditional role allocations consider that men are more skilled in this regard and have therefore been more engaged in the business from the beginning.

And not least, women often lack self-confidence and are experiencing self-doubts about their abilities and skills. Hosting a podcast is a risk game as it’s unclear if it leads to success and downloads, or not. Men are more likely to set a foot into podcasting by trying out, making mistakes and take that risk, whereas women tend to overthink their decisions and actions twice.

Why should we care?

So, why should this topic of female underrepresentation bother us? And why do we think that there is a need for more female podcasters? Let’s explore the arguments.

The growth of the podcasting world in the last couple of years implies that podcasts do influence people’s lives to a certain degree, and will even more in the future. Therefore, an equal representation is needed, because we should not be exposed to one-sided influence. Women are contributing content from unique perspectives, through particular narratives and with different learning points. In short, a lack of female, as well as a lack of other underrepresented voices leaves us with untold stories and we miss out on many interesting aspects and opinions.

We should also care because we already know some great podcasts out there which are hosted by women. And not just The Michelle Obama Podcast which aims to empower other women, because she definitely had the advantage of launching a podcast with her person being known all over the world already. But you surely have heard about the award-winning true crime podcast Serial, a groundbreaking show created, hosted and produced entirely by women in the person of Sarah Koenig and Julie Snyder. The podcast came out in 2014 and reached one million listeners within a month of its launch. These numbers demonstrate that female hosts have what it takes to create exceptionally popular content to rough up the podcast best of lists. Regardless of voice pitch. Sarah Koenig has since then become a role model for female podcasters and has been encouraging women to become successful podcast hosts, despite the obstacles along the way.

What can we do?

Previously mentioned arguments demonstrate that something needs to be done. We want to see more women who are engaged in podcasting in the future! The question is, what can we do to change something?

First of all, we should lower our expectations towards a podcast host and acknowledge that everybody who steps into the competition has to learn how the business works. As soon as women enter the game, they are expected, and expect from themselves, to be experts in what they do. But podcasting doesn’t work like that. Setting up a show, planning and recording as well as editing episodes is not as easy as many people think. Every podcast host started out with basic skills and got better during the process, also male hosts. Women should face the same conditions and not be judged on first impressions.

As the world has become more familiar with podcasts, bigger platforms and software developers have become aware of the problem of underrepresentation and have started initiatives to address it. The biggest players Spotify, Apple and Google as well as editing software GarageBand or Adobe Audition have become active to support and inspire marginalized voices who want to get into the business with programs and learning courses. In addition, WNYC Studios, producer and distributor of podcasts and on-demand radio based in New York, launched an annual festival for women who want to shape the future of podcasting. Through conversations, workshops and mentoring sessions, women from all over the world come together to network and motivate each other to get their head into the game and change the current state.

These are all small and important steps into the right direction, and the industry itself is doing its best to tackle the challenges. However, a lot of work still has to be done to reach equal representation in podcasting. It’s not only the industry which has to be made responsible, also we listeners do have our share in this. We should distance ourselves from stereotypes and our usual habits and give every podcast host an equal chance.

The podcasting world needs courageous and strong women who go ahead and show what’s possible, so that others can follow. Because we want to hear all the stories!